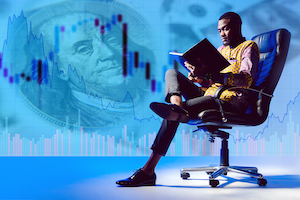 While 401(k) plans have been the gateway to investing for many black Americans over the last several decades, that finding does not appear to be as prominent, as risky investments grow in popularity, a new survey finds.

In contrast, more than twice as many black investors as white investors said cryptocurrency was their first investment (11% versus 4%).

On a positive note, the defined contribution plan participation gap between black and white investors has nearly closed, according to the survey, which compares the investing and savings attitudes of black and white respondents.

Black Americans are saving and investing more in 2022 than they did in 2020, with a 40% increase in contributions—up to $657 per month on average from $393 in 2020. The increase is driven by new investors, high earners and respondents under 40. And while this helped narrow the gap, white Americans are still saving and investing more at $857 per month.

The survey also finds that investor participation in stocks is at historic lows for both groups. In 2022, just 58% of black investors and 63% of white investors own stocks, compared with survey peaks of 74% for blacks in 2002 and 86% for whites in 2015. However, stock market participation is higher among younger black Americans, with 68% of black respondents under 40 now investing, compared to 57% of younger white investors.

Meanwhile, the popularity of new, higher risk investment options, especially among younger and first-time black investors, is striking, Schwab notes. While it’s not clear how they are investing the increased contributions cited above, 13% of black respondents under age 40 cite cryptocurrency as the best investment, third only to real estate and individual stocks, and ahead of mutual funds.

There is clear evidence of an education gap between black and white Americans, Schwab further observes. Despite headline-making news about volatility in cryptocurrency values, platform hacks and a lack of government regulation, black investors are less likely than white investors to think that cryptocurrency is a risky investment (68% versus 73%).

At the same time, the survey found that black Americans are less trusting of the stock market (30% versus 23%) and financial institutions (28% versus 18%) compared with white Americans. This has led to many black investors pulling out of the market, the study notes.

Moreover, a third of black investors (33%) say they have invested based on something they saw on social media, compared with less than a quarter of white investors (20%). This gap is even more pronounced among black and white investors under 40 (51% and 36%, respectively).

“The confluence of low stock market participation, appetite for risky investment options and alarming lack of knowledge about fundamental investing principles is a red flag about the critical need for greater investor education,” says Mellody Hobson, Co-CEO and President of Ariel Investments. “Many new and younger investors have never experienced market volatility like we’ve seen in the last couple years, and we have a responsibility to educate these new investors about the value of long-term investing to build wealth and achieve financial security.”

Adds Carrie Schwab-Pomerantz, President of Charles Schwab Foundation, “The survey shows a penchant for ‘get rich quick’ tactics, and if we don’t educate the next generation about the value of long-term investing, their financial prospects will be limited and it will be difficult for our industry to gain their trust.”