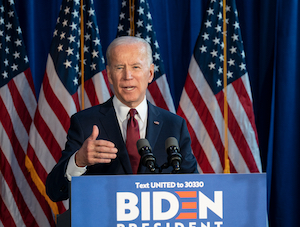 President Biden will sign executive orders today that will, among other things, press for a review of the Labor Department’s recent ruling on ESG investments.

The widely anticipated executive orders—more than a dozen—are said to direct[i] nearly 100 agency actions aimed at unraveling President Trump’s environmental policies. The Washington Post notes that the regulations he is instructing agencies to review “range from a recent Labor Department rule preventing environmentally sustainable mutual funds from being default retirement investments” to a Transportation Department regulation making it easier to transport liquefied natural gas by rail.

The Labor Department’s final rule—which moved away from the proposed rule’s focus on environmental, social and governance (ESG) factors in investing—was effective on Jan. 12, 2021, 60 days following publication in the Federal Register.

In finalizing the regulation, the DOL noted at the time that the purpose of the action was to set forth a regulatory structure to assist ERISA fiduciaries in navigating these ESG investment trends and to “separate the legitimate use of risk-return factors from inappropriate investments that sacrifice investment return, increase costs, or assume additional investment risk to promote non-pecuniary benefits or objectives.” In asserting the lack of a precise or generally accepted definition of ESG, the final rule removed references to ESG, referring instead to “pecuniary factors and non-pecuniary factors” in defining the relevant fiduciary investment duties.

The DOL first proposed the rule on June 23, stating that it was “concerned that some investment products may be marketed to ERISA fiduciaries on the basis of purported benefits and goals unrelated to financial performance” and that “ESG investing raises heightened concerns under ERISA.” The proposal received more than more than 1,100 written comments and more than 7,600 form letter responses.

While it’s certain to be very much on advisors’ minds, it’s not yet clear what action might be taken with regard to the “new” (December 2020) prohibited transaction exemption rule regarding investment advice (a.k.a. “the fiduciary rule”).

Update: While it’s an exemption, not a regulation, it seems likely that the “fiduciary rule” would be included in the “regulatory freeze memo” that President Biden mentions in a fact sheet accompanying the Executive Order. That memo “…will pause any new regulations from moving forward and give the incoming Administration an opportunity to review any regulations that the Trump Administration tried to finalize in its last days” and will “allow the Biden Administration to prevent any detrimental so-called ‘midnight regulations’ from taking effect, while ensuring that urgent measures in the public's interest can proceed.”

The prohibited transaction exemption is slated to become effective on February 16, following its December 18 publication in the Federal Register.

[i] Specifically, the fact sheet outlining the executive orders says it is “Directing all executive departments and agencies to immediately review and take appropriate action to address federal regulations and other executive actions taken during the last four years that were harmful to public health, damaging to the environment, unsupported by the best available science, or otherwise not in the national interest, including agency actions identified on the attached list.” And indeed, “‘Financial Factors in Selecting Plan Investments,’ 85 Fed. Reg. 72846 (November 13, 2020)” is on that list.