Parties of Interest Increasingly Being Tested in Plan Litigation

The plaintiff’s bar is getting increasingly creative in bringing parties of interest into DC plan litigation efforts, according to an April 16 panel discussion at the 2018 NAPA 401(k) Summit.

“Provocateur” Karen Scheffler, Senior Vice President and Senior ERISA Legal Counsel with AllianceBernstein (AB), moderated a panel with Thomas Clark, Jr., of the Wagner Law Group and Michael Wolff, of Counsel with Schlicter Bogard & Denton, who, in addition to sharing stories of their time working together, offered insight on current litigation trends.

While noting that plan sponsors take the brunt of litigation as fiduciaries, Scheffler inquired about the likelihood of recordkeepers and service providers being added as parties in litigation. Clark, who was formerly with the Schlicter firm and jokingly describes himself as a “self-reformed” plaintiff’s lawyer, noted that the chances of that happening appear to be increasing.

“I’m sorry to say that the chances of it are more common now than they were five years ago,” Clark stated, further adding that “the theories are more aggressively being brought against advisors.” He explained that the plaintiffs' firms are coming after the parties of interest, which could include any person or firm that offers services to a plan.

To that end, he explained that the plaintiffs' firms are coming up with "‘newish’ legal theories that if you’re a party of interest, even though you’re not a fiduciary and you participate in another’s fiduciary breach, you can be held liable, too, and this is being tested in the courts.”

Clark noted that one theory involved a plaintiff’s lawyer going after a recordkeeper that was named as a codefendant where the primary allegations were against the plan sponsor. He explained that the recordkeeper was swept in over allegations that they did not have a good 408(b)(2) process because the fees were allegedly not reasonable and claimed that they were liable for paying the fees back. 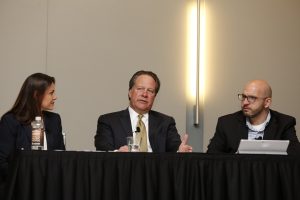 Wolff noted that the theory is based on a Supreme Court ruling, such that any service provider to a plan is a party of interest and if they receive a portion of a plan’s assets knowing that it was the result of a fiduciary breach, then they can be held liable under ERSIA for restitution. Even still, he added, “it’s a hard theory to prove.”

Clark further emphasized that even though advisors may be named in the plan documents as the named investment fiduciary, the liability lies with the plan sponsor and they will always be subject to getting sued under the theory that they failed to monitor the named plan investment fiduciary. “They might win on summary judgment, they may win a trial, but it’s not going to prevent them from getting sued,” Clark noted.

Another interesting case that Clark described involved a firm that went after a large recordkeeper for claims about how they were controlling the investments on the platform and setting their own fees. He noted that the plaintiffs were trying to go after a class of plans. The case started out against the advisor in a tiny plan getting sued, but apparently it was a “back door way” to suing the recordkeeper’s entire book of clients.

To that end, Wolff explained that his firm is seeing plan sponsors attempting to push off responsibility on the plan advisor when things have gone wrong. Often you’ll see plan sponsors claiming they were only doing what were told to do, so they contend it’s the advisor’s responsibility, he noted. “The employer says it’s your fault; if you’re going to say it’s the employer’s fault, then it’s one or the other, and we’ll let the court figure it out,” Wolff stated in describing the plaintiff’s approach.

When asked to provide tips on avoiding litigation, both Wolff and Clark emphasized the importance of documenting a process when making decisions about a plan.

Quarterly meetings have minutes that lay out the reasons for all the decisions being made and if there is nothing in the minutes, then it suggests there wasn’t a process followed, Wolff explained. He further noted that the advisor is in a “tricky situation” when they’ve recommended doing something and the employer hasn’t done it. “You need to protect yourselves by having documented that you told your client to do this, so if you don’t do that, then you’re setting yourself up,” Wolff cautioned.

Clark agreed with Wolff in terms of documenting process, but further suggested that advisors take a look at what they’re recommending to their clients about what specifically they are disclosing to their plan participants. He cautioned against providing overly aggressive disclosures beyond the SPDs and 404(a)(5) participant disclosures, noting that there have been a number of defendants who have been successful under the three-year statute of limitations at the motion-to-dismiss stage.

Moreover, Scheffler urged advisors to make sure their service agreements are clear and define the scope of terms. She explained that she reviewed numerous agreements that were extremely vague in the scope of what the advisor was taking responsibility for, which could have led to anything being put on them.