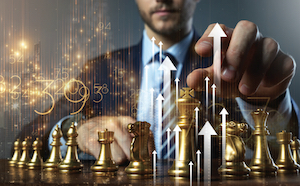 Continuing a trend that emerged in 2020 and accelerated in 2021, large, pure play wealth managers are expected to continue being a major force for M&A activity in the retirement plan space, according to ECHELON Partners’ 2021 RIA M&A Deal Report.

In 2021, there were 17 transactions involving retirement plan advisors with at least $1 billion in assets and/or retirement platforms, marking a 143% increase over 2020’s seven deals involving the same type of seller.

The ability to cross-sell wealth and retirement plan services—especially within the DC market—has resulted in heightened interest from the largest buyers in each respective marketplace, according to ECHELON. “There are natural cross-selling synergies across private client wealth management and retirement plan advice, and we believe it will continue to make strategic sense for this transaction type to occur,” the firm says.

The two most prominent buyers in the retirement space are HUB International Limited and OneDigital, the report observes. But the largest transaction was Empower’s acquisition of Prudential Financial’s retirement plan business for a reported $3.55 billion. That deal involved $314 billion in assets and included Prudential’s DC, DB, non-qualified and rollover IRA, stable value, and separate account business lines.

Prior to this year, CAPTRUST was the only at-scale retirement plan consolidator that had a significant wealth practice, the report further notes. However, with Creative Planning acquiring Lockton’s $110 billion AUM retirement practice and other large players signaling or announcing comparable transactions, the firm expects increased deal volume related to this trend.

There were 307 transactions in the industry that were announced last year, nearly 50% higher than 2020’s previous record of 205 transactions. In addition to the record-breaking activity, there were 145 acquisitions of firms with $1 billion or more in assets—the most in a single year. Average deal size also increased, topping $2 billion in AUM for the first time. In total, $576 billion in assets were acquired last year, according to the report.

Strategic acquirers are once again the dominant force in dealmaking, with private equity on their side. The category completed 147 total deals in 2021, which marked the category’s highest share of total deals since ECHELON began tracking the data in 2007, the report notes.

ECHELON notes that nearly every prominent strategic acquirer in the industry has at least one PE partner. That fact, combined with strategic acquirers’ increased share of announced deals in 2021, led PE investors to be directly or indirectly responsible for 209 total transactions in 2021, or 68% of the year’s total. “Whether it is establishing platforms focused on consolidation, conducting add-on acquisitions, or providing growth capital to WealthTECH’s next unicorn, there continues to be significant interest from this buyer group,” the firm observes.

While most transactions continue to be succession-driven buyouts, the report further notes that there is growing demand for minority deals, which was a 58% year-over-year increase in volume in 2021.

WealthTECH M&A also exploded in 2021 as the “technification of wealth management” has been advanced by key transitory forces like the ongoing pandemic. Increased personalization of portfolios, distributed platform access to alternatives, and the overarching race to build the best all-in-one outsourcer platform for advisors were among the underlying themes in the key deals, according to the report.

This year, ECHELON anticipates another active year for wealth management M&A. “Despite macroeconomic risks (mainly inflation and, consequentially, a hawkish Fed), we expect continued demand for wealth management M&A from industry participants,” the firm says. ECHELON identifies five primary drivers of M&A that will lead to strong activity in 2022 and beyond:

“Buyers that are able to articulate a compelling value proposition to sellers while executing on a carefully developed M&A strategy will likely have the greatest success,” the report states.

For sellers, ECHELON believes that rising valuations and a desire for outside capital to fuel activities, such as M&A, will push larger firms to explore majority or minority sales of their businesses. Other factors include an aging advisor demographic, with many business owners seeking a succession solution via outside sale.